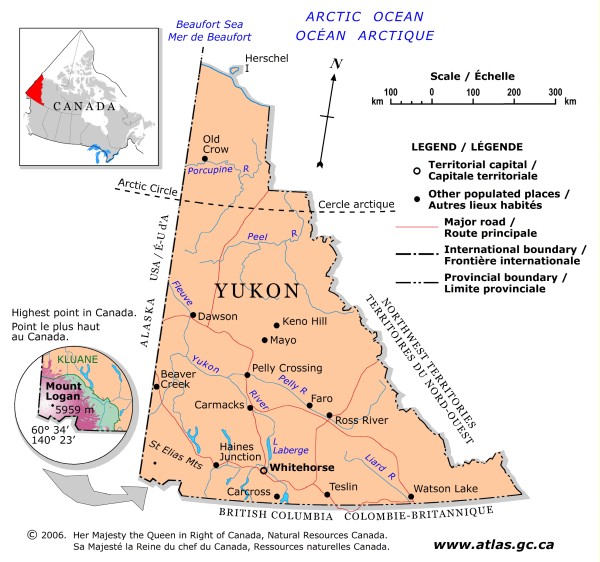 Yukon is the smallest and westernmost of Canada’s three territories. It also is the least populated province or territory in Canada, with a population of 35,874 people as of the 2016 Census. Whitehorse, the territorial capital, is the largest settlement in any of the three territories. Yukon was split from the Northwest Territories in 1898 as the Yukon Territory. The federal government’s Yukon Act, which received royal assent on March 27, 2002, established Yukon as the territory’s official name though Yukon Territory is also still popular in usage and Canada Post continues to use the territory’s internationally approved postal abbreviation of YT. Though officially bilingual (English and French), the Yukon government also recognizes First Nations languages.

At 5,959 m (19,551 ft), Yukon’s Mount Logan, in Kluane National Park and Reserve, is the highest mountain in Canada and the second-highest on the North American continent (after Denali in the U.S. state of Alaska). Most of Yukon has a subarctic climate, characterized by long, cold winters and brief, warm summers. The Arctic Ocean coast has a tundra climate. Notable rivers include the Yukon River, as well as the Pelly, Stewart, Peel, White, and Tatshenshini rivers.The territory is the approximate shape of a right triangle, bordering the U.S. state of Alaska to the west and northwest for 1,210 kilometres (752 mi) mostly along longitude 141° W, the Northwest Territories to the east and British Columbia to the south.[12] Its northern coast is on the Beaufort Sea. Its ragged eastern boundary mostly follows the divide between the Yukon Basin and the Mackenzie River drainage basin to the east in the Mackenzie mountains.

Yukon’s major industry is mining (lead, zinc, silver, gold, asbestos and copper). The government acquired the land from the Hudson’s Bay Company in 1870 and split it from the Northwest Territories in 1898 to fill the need for local government created by the population influx of the gold rush. Thousands of these prospectors moved to the territory, ushering a period of Yukon history recorded by authors such as Robert W. Service and Jack London. The memory of this period and the early days of the Royal Canadian Mounted Police, as well as the territory’s scenic wonders and outdoor recreation opportunities, makes tourism the second most important industry in the territory. (Source-Wikipedia).