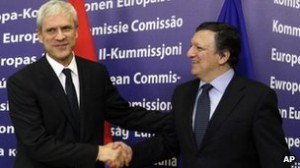 European Union leaders have granted Serbia “candidate status”, at a summit in Brussels.

Belgrade has made a series of democratic reforms and captured war crimes suspects to satisfy EU demands. It applied for EU membership in 2009.

The president of the European Council, Herman Van Rompuy, described the move as a “remarkable achievement”.

He said it was the result of improved dialogue between Serbia and Kosovo, which Belgrade still regards as a breakaway territory.

Candidate status is a recognition that a country is ready to begin formal negotiations on EU membership.

If Serbia’s neighbour Croatia joins as planned in mid-2013 that process will have taken nearly a decade.

Candidate countries have to bring their laws into line with EU standards. Their institutions have to demonstrate respect for democracy and human rights and they have to have open market economies that can withstand competition.

Croatia is now an acceding country, in EU jargon. The other candidate countries are: Iceland, Macedonia, Montenegro and Turkey.

Serbia recently made a series of concessions on Kosovo, which has been a major stumbling block.

European Commission President Jose Manuel Barroso said Serbia’s candidacy “shows that the EU remains very attractive … [because it and other countries] want to join this project of freedom, responsibility and solidarity”.

Earlier Romania withdrew its objections to Serbia being allowed to start the process of joining the EU after reaching a deal on minority rights.

A decision had been expected on Tuesday, but Bucharest said it would not allow Belgrade to take the next step towards EU membership until assurances were given on respect for 30,000 Romanian-speaking Vlachs in Serbia.

Diplomats on Thursday said an agreement between the two countries had been signed. Romanian President Traian Basescu was understood to have given the green light for Serbia’s candidacy.

The two sides also agreed to manage jointly their border, scene of recurrent violence between Nato peacekeepers and ethnic Serbs who make up the majority in northern Kosovo.

Some 80 countries have recognised Kosovo since it declared independence in 2008, but a still larger number have withheld recognition.