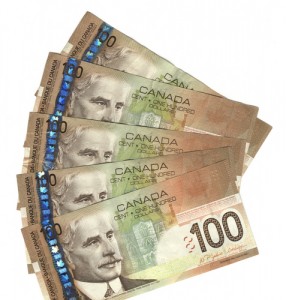 By Austen Sherman – Mar 1, 2012
Canada’s dollar gained to a five- month high against its U.S. counterpart on optimism demand for raw materials will accelerate as the global economy expands.

The currency rose for a fourth day, the longest string of advances in more than a month, as jobless claims in the U.S., the nation’s biggest trade partner, fell to the lowest level in four years. It gained versus the majority of its most-traded peers before data tomorrow that may show the Canadian economy grew in the fourth quarter. China’s manufacturing expanded, a report showed.

“If you go around the world, there are three stories,” said David Watt, senior currency strategist at Royal Bank of Canada’s RBC Capital Markets unit in Toronto. “The sense of U.S. economic recovery is better, Greece has been on the backburner and the Chinese economy is headed for a soft landing. That supports some of the more traditional risk currencies, like the Canadian dollar.”

The Canadian currency has gained 3.6 percent this year versus the U.S. dollar on increased demand for higher-yielding assets. Canada derives about half its export revenue from raw materials such as crude oil, its biggest export, and copper, lumber, gold and wheat.

Crude rallied to a 10-month high as the U.S. boosted pressure on Iran to halt its nuclear program and escalated warnings the Persian Gulf oil producer may face attack. Speculation grew that global supplies of the commodity may shrink. Crude for April delivery climbed as much as 3.4 percent to $110.55 a barrel in New York, the highest since May 4, before trading at $108.60, up 1.6 percent.

Canada’s dollar would probably weaken if oil prices were to surge amid market shocks caused by an event such as an attack of Iran because that would damp risk appetite and spur demand for haven, according to Bank of America Merrill Lynch. The currency has been more highly correlated with risk than with oil over the past year, it said.

“Canada is one of only two countries in the Group of 10 who are oil net exporters, so you’d think high oil prices would be a positive,” said New York-based David Grad, one of the currency strategists at the firm who wrote a client note today on the subject. “However, the Canadian dollar has also been very related to the risk theme, and that would dominate.”

Applications for unemployment benefits in the U.S. fell to 351,000 in the week ended Feb. 25, a level matching the lowest since March 2008, Labor Department figures showed today. Economists in a Bloomberg survey forecast 355,000 claims.

In China, the purchasing managers’ index rose for a third month, rising to 51.0 from 50.5 in January, the statistics bureau and logistics federation said in a statement today. It was the highest level since September. The dividing line between expansion and contraction is 50.

“The data coming out at the moment from the major economies seems reasonably encouraging,” said Tom Levinson, a currency strategist in London at ING Groep NV. In the absence of “another issue from the euro zone, the expectation would be that those riskier assets, commodities, commodity currencies and emerging market high-yielding currencies all extend the gains that they’ve already put on this year.”

Gross domestic product expanded at an annualized rate of 1.8 percent from October through December, after growing at a 3.5 percent pace in the third quarter, a Bloomberg survey forecast before Statistics Canada reports the data tomorrow.

U.S. debt also dropped today, and yield on the Treasury 10- year note rose above that on its Canadian counterpart for the first time since January. The difference was two basis points, compared with the U.S. yield declining two basis points yesterday below the Canadian.

The loonie rose for a second day versus Europe’s shared currency, its first back-to-back gains in two weeks, as euro- area finance ministers authorized a bailout fund to raise money for Greece’s bond exchange. Canada’s dollar gained 0.5 percent to C$1.3119 to the euro.

The currency climbed 1.5 percent yesterday versus the euro, the most since May 2011, after the European Central Bank loaned 800 euro-area banks 529.5 billion euros to shore up liquidity.

The Canadian dollar may be approaching a decline against its U.S. counterpart. The greenback was at 31.3 today on the 14- day relative strength index against the currency, compared with 35.6 yesterday. A reading below 30 signals an asset may be due to reverse direction.

The loonie gained 1.5 percent over the past week against nine developed-nation counterparts monitored by Bloomberg Correlation Weighted Currency Indexes. The U.S. dollar was little changed, and the euro declined 1.1 percent.

To contact the reporter on this story: Austen Sherman in New York at asherman18@bloomberg.net

To contact the editor responsible for this story: Dave Liedtka at dliedtka@bloomberg.net