Calgary to lead Canada’s economic growth in 2013 – Forecast 4.1% average growth between 2013-2016
Posted by ICCC on in Canadian Economy 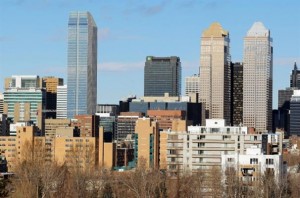 Calgary’s economic outlook looks bright according to the Conference Board of Canada.
Photograph by: Grant Black, Calgary Herald
CALGARY — Calgary is forecast to lead the country in economic growth between the years 2013-2016 averaging 4.1 per cent each year, according to the Conference Board of Canada’s Metropolitan Outlook Spring 2012 released Tuesday.

The report forecast Saskatoon to lead the country this year with Real GDP Growth of 3.6 per cent followed by Calgary at 3.5 per cent and Edmonton at 3.2 per cent.

“In 2012, overall activity (in Calgary) is expected to improve once more, thanks to continued strength in the manufacturing and business services sectors,” said the board in its report. “Moreover, another solid year is expected in the wholesale and retail trade sector.

“Given the positive economic outlook, job prospects in Calgary will build on the momentum created in 2011.”

The board said total employment is set to rise by another 3.1 per cent this year, which translates into roughly 22,000 new jobs in the Calgary region.

“With energy prices anticipated to remain relatively high in the coming years, economic growth in Calgary will reach 4.4 per cent in 2013, then average a nation-leading four per cent per year from 2014 to 2016, driving the unemployment rate down to 4.1 per cent by the end of the forecast,” said the report.

The board forecast Canadian economic growth of 2.1 per cent this year and averaging 2.6 per cent between 2013-2016.

Ben Brunnen, chief economist at the Calgary Chamber of Commerce, said the board’s Calgary forecast is consistent with some of the indicators he’s seeing in the city.

“The size of the investments coming in through the energy sector, the construction, building permits are really coming back quite strong. We’ve got the airport expansion underway,” said Brunnen.

“From an economic activity perspective, there’s a lot happening in our city. When we’re looking at what’s happening province-wide, Calgary tends to lag a little bit. When we look at the strong investment numbers from the province and see how those get manifested in the city, the Calgary economy tends to pick up a little bit after the provincial economy. The province has been strong. In 2013, without a doubt, we expect to see some strong growth in the city of Calgary as well.”

He said investment drives job creation which drives people coming to the city.

The conference board report is forecasting economic growth of 3.3 per cent in Alberta this year followed by 4.0 per cent in 2013. The average growth is forecast for 3.5 per cent between 2013-2016.

“With investment expected to total in the tens of billions of dollars, Alberta’s construction industry will be strong in 2012,” said the report. “Energy investment will also drive growth over the forecast, while output of minerals fuels and mineral services will expand rapidly as incremental activity comes online.”